We got a late start from the house this morning (that never happens?) and drove to Nebraska City to put in on the Missouri River.  The Gilg family was kind enough to come with and make it a special occasion.  We arrived in NE City around 10:15 a.m. and drove down to the river to find minor flooding.  The good news was we parked in the middle of the road and unloaded my gear and canoe.  I loaded her up and after photos and hugs and kisses hit the river with my start time around 10:45 a.m.

The river is flowing very fast and I have to watch out for whirlpools created by bar dams the Corps of Engineers installed to direct the water to the center of the channel to create enough flow year round for barges.  The rudder system on the canoe comes in handy at those times in keeping the bow directed downstream.  I hadn't realized how fast I was moving but by noon I realized I would make my daily trip mileage with little trouble.  I did stop for lunch around 1:00 p.m. and that was more tricky than I thought it would be.  With the current so fast it's hard to approach a landing site without shooting by.

At around 4:00 p.m. I passed Brownville, NE, and the nuclear power plant.  I had planned to continue paddling until 5:00 p.m. but I saw a MO Parks campground and decided to call it a day.

The first day out I've seen a few bald eagles and lots of vultures and misc. ducks.  I'm in a funky mood now that the planning and anticipation has passed and I'm actually doing this trip.  I know it will get easier once I get in a routine but I do miss my wife and kids.  I'm also a bit sore from the first day's physical exertion.  Oh well, I should sleep well tonight!

Time to make dinner and get some sleep.  I hope to check in every day but that will depend on if I can charge batteries on the iPad and my phone.  I didn't see another person on the river all day so I'm going to have to plan stops at towns along the way, the first probably being on Tuesday.

I'll attach a few photos of the river and my campsite. 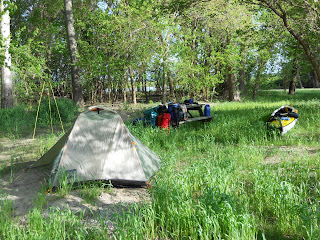 Now that it stopped raining and the sun came out this doesn't look so bad.
Posted by Jerry Bricker at 6:25 PM No comments:

Well, it's official.  I'm bailing on the idea of paddling to Florida.  Instead, I will paddle down the Missouri River to St. Louis, MO, and then head up the Mississippi River to the Illinois River.  From there I will travel to Lake Michigan and then on to my home state (Michigan) and to my sister's house in Holland.  She promised me a bucket of beer if I made it to the dock at her house in Florida, I'll be holding her to that when I get to MI.

Watching the river gauges on the lower Mississippi and Ohio rivers this week made it clear that it's going to be a mess down south for several more weeks.  It's possible the water levels would have dropped by the time I arrived but I was concerned about the muck and silt left by the flooding.  Quite frankly, I didn't want to spend 1-2 weeks camping in sticky goo.  Thus, the decision to head north.

The new route will still have me paddling 1200 miles (versus 1700 for the other route) but I can be a little less stressed about making it to my goal by July 4th.  In fact, I should be to Michigan by the end of June.  Another plus is that I can take the train home to Lincoln and then drive up later this summer or early fall and get my canoe and equipment.  I didn't have a plan how to get home from Florida or where my gear would be stored so there is at least some good news in making a major route change.

This trip was always about equipping myself for a 1000+ mile adventure and learning how to do an expedition length excursion.  In some ways I feel I'm copping out but I guess 1200 miles is still a bit of a challenge. :)  Oh well, the maps have been downloaded and I've worked up a new daily mileage goal sheet.  Since I'm carrying my food the entire trip nothing has really changed in my preparations.  I'm all ready to go...

Launch is tomorrow morning from Nebraska City.  Wish me luck! 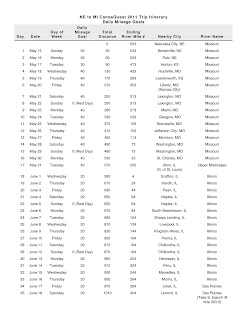 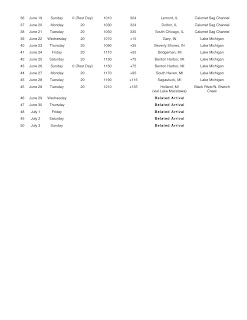 Posted by Jerry Bricker at 7:08 PM No comments:

Major flooding along the lower Mississippi! 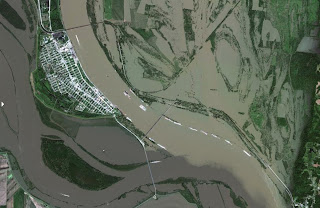 Aah, crud! The spring I plan to depart on my first mega canoe trip is the spring the lower Mississippi River experiences major flooding. Cairo, Illinois, lifted the mandatory evacuation order yesterday but a curfew still is in place until next week. It doesn't look like the water will be down below flood levels until early June, just about the time I had planned to arrive. It looks like I have a few options which include: 1) delaying my departure date, 2) going as far as St. Louis on the Missouri and ending the trip, 3) keeping my fingers crossed all will be well when I get to the Mississippi, or 4) change my travel route and head north to a different destination.

At this point I'm leaning towards option #4. I'm seriously considering paddling north to the Illinois River and then heading to my home state of Michigan via the Lake Michigan shoreline. That option is looking pretty tempting right now with the uncertainty of the flooding situation along the river course I had planned to travel. At this point I'm taking a wait and see approach. At some point in the next week or so I'll make the decision just for the peace of mind. The upshot is that either route will have me traveling by water for at least five weeks and I'll have quite an adventure doing so.

Posted by Jerry Bricker at 11:23 AM No comments: 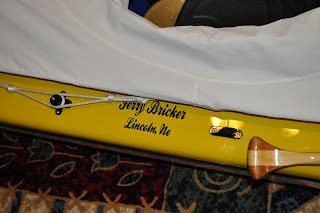 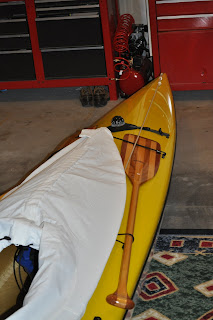 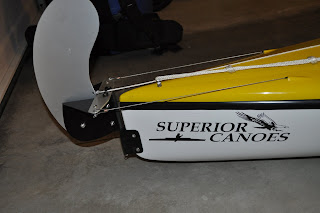 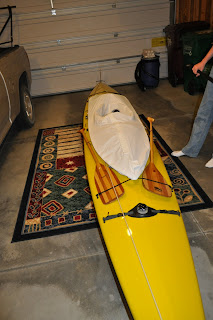 With the spray cover installed.
Posted by Jerry Bricker at 11:29 PM No comments: 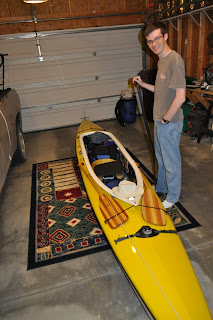 My first attempt at packing the canoe.
Posted by Jerry Bricker at 11:29 PM 1 comment:

750 miles by truck to pickup my canoe! 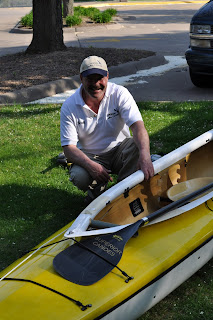 Scott Smith, the builder of my canoeSaturday was a long day. I drove to Iowa to the Illinois border to meet Scott Smith from Superior Canoes to take delivery of my closed deck canoe. He kindly drove half-way from Michigan so I didn't have to make a 23 hour round trip to get the boat. As it was I didn't get back to Lincoln until after 1:00 a.m. It was worth the trip, though, as the boat is a beauty, exactly the canoe I've been dreaming about owning for over 30 years.

This morning I tinkered with packing her and it rapidly became apparent that I needed to rethink and rearrange my bags. I have three large food bags holding eight weeks of food, enough to make it to Florida. Thus, food is 3/4 of my starting load. It all fits in the boat but there's little room to spare!

I did get a chance to sneak over to Holmes Lake this afternoon between Mother's Day activities. The boat paddles like a dream, even heading into the strong wind gusts (it felt like the wind was blowing 30 miles an hour today!) I had little trouble. The rudder system is quickly mastered and I was able to make good time when paddling into the whitecaps.

I didn't load the boat with all my gear today. Too windy for a loaded maiden voyage. I'll do that later in the week so I get a feel for how she rides.

Posted by Jerry Bricker at 11:11 PM No comments: