A Q&A session with other paddlers, testing the sail kit 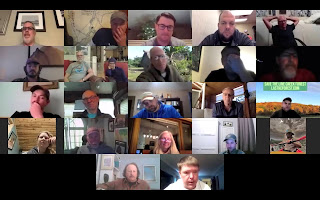 The highlight of this week's trip preparation was a Zoom question and answer session on Monday
evening with 20+ other paddlers.  A big thanks to host Norman Miller of Missouri River Paddlers for hosting the event; I got a few good tips and it was great meeting other peeps that either have done the river or are heading out soon.

Our weather finally warmed up enough for me to get onto the water and give the modifications to the boat a test run.  There's a small lake in the neighborhood across the street so I loaded her onto my portage cart and wheeled over.  I purchased the cart for my float on the Lower Missouri ten years ago and never needed to use it.  The Upper Missouri has over 15 dams to portage around with a few being longer distances (up to 2 miles) so it's smart to see how the cart will handle. 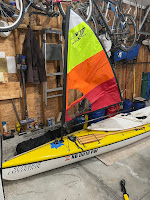 I thought my first time using the sail kit would be best in a smaller body of water.  So, after my 1/2 mile "portage," I dropped the boat into the water and gave it a try.  The winds were a bit strong (ca. 20 mph) and swirling unpredictably which made putting up the sail and getting underway difficult.  Since the lake (more like a pond) has such a short fetch, this outing was more about testing the rigging and the overall setup.

Today's weather was gorgeous (sunny, 65º F) with little wind.  I put the canoe racks on the truck and loaded the canoe for the short drive over to Holmes Lake.  Holmes is also a small body of water but large enough to make a few runs downwind and then turn around to learn how to sail upwind.  The conditions were perfect for learning how to trim the sail and test the overall setup. 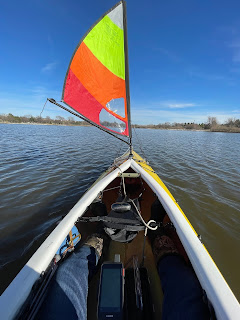 The route of the Missouri River through North Dakota and South Dakota is a series of five reservoirs.
I'm hoping the sail will ease paddling across the long distances of calm lake water.  The winds on those lakes are notoriously wicked and I'm hoping they'll cooperate (strong enough to assist and blowing in the right direction).  I'll need to get onto one of our larger reservoirs and continue to master how to sail but today was a good start.

Lastly, this outing was a good time to test my GPS install/placement and the stowage options I talked about in last week's blog post.  It appears that I got it right, everything is within easy reach and organized efficiently.

Time is flying by, my countdown is by the number of days remaining instead of weeks or months.  The goal for the upcoming week is to unpack everything and do a shakedown and repack.  For all my trips, and my peace of mind, I like the last to-do items to be related to logistics and not equipment and packing.

Posted by Jerry Bricker at 10:19 PM No comments:

Only 55 days/8 weeks remain until the big put-in on the Missouri River at Three Forks, Montana!  Most of my planning is complete and I'm way ahead of things (that thought actually panics me, I know I'm missing something on my to-do list!).  I thought I'd use a few of my upcoming weekly pre-trip posts to summarize the improvements I've made on my canoe since last September.

From the moment in 2011 that Scott Smith, owner and manufacturer of Superior Canoes, delivered my Superior Expedition (a closed deck solo rudder canoe), I've known there were little things that would make paddling her more comfortable.  I love the overall design and handling of the canoe and she's perfect for flat water trekking on big water like the Missouri River.  A long distance trip requires long periods of seat time and that's when a small inconvenience in the layout of the cockpit becomes a growing irritant.

Every time I've sat in the seat of my boat one glaring deficiency became immediately apparent, stowage and placement of small gear is severely lacking.  There's a built in map stow area to the left of the seat but no place to put a drink cup, GPS unit, weather radio, etc.  I didn't have time to work on ergonomics prior to my paddle down the Lower Missouri in 2011.  For the 2021 trip on the Upper Missouri I spent several months researching and installing upgrades to the cockpit.  A summary of what I've done follows.

• A Stash Pocket (see photo) from Down River for holding my marine radio and coffee cup/water bottle.  I considered other means of stowing items but the rudder cables that run past the cockpit seat are exposed.  The solution was to install an under deck line from which to hang the Stash Pocket.  Having a hot coffee at hand will totally rock the start of the paddling day!

• The UnderDeck Bag from North Water (see photo).  Compared to a kayak, the cockpit of the Superior Expedition is fairly open.  This allows for rapid stowage and removal of equipment but results in a large area of dead space ahead of the padder.  My setup uses the bag's quick-releases and a set of #2 Nite-Ize S-Biners to hang the UnderDeck Bag via rigging in the open cockpit.

• I continue to be amazed at the ease and convenience of handheld GPS units.  The downside, however, is that the small screen is hard to see while out on the open water.  This is exasperated by the fact that there's no place to set the GPS unit.  Usually I place the GPS on the canoe floor and either stoop or periodically pick up the unit when I need to view the screen; difficult tasks when paddling in strong wind or current.  My first thought for a solution was an under deck attachment and swing arm to mount the GPS unit.  That configuration, however, would be impede my paddle stroke; not a good solution.  It was clear that the best situation would be to mount the GPS unit between the paddler's legs with the screen in an elevated position.  To do so would require a glue mount thus creating an obstacle when egressing from the boat.

My solution (see photos) was to attach a RailBlaza arm on the underside of the canoe saddle/seat bottom using a SidePort mount.  The system extends forward between the paddler's legs where the GPS unit is attached to a Fish Finder Mount.  When entering and exiting the boat the GPS/Fish Finder can be set aside so its not obstructing the padder's movement.  We'll see how well this system works on test paddling outings in the next few weeks...

• For my 2011 trip I purchased set of Navisafe Portable Navigation Lights.  I wanted to be prepared for any needed night paddling situation (due to escaping hot weather, strong winds, etc.).

My Navisafe lights attach via strong magnets through the boat deck.  The result is a precarious assembly that can easily be knocked loose.  My solution was to modify my lights by attaching their magnetic base to a RailBlaza Attachment Adapter.  This gives a firm mount while allowing the light to be removed when not in use.  The mount for the front tri-color light is a RailBlaza QuickPort (see photo) while the rear (white) Navilight 360º is mounted using a RailBlaza Expanda Track (this allows threading of the rudder elevator line –– see photo).

Posted by Jerry Bricker at 4:47 PM No comments:

It's time to finish what I started...  It's been ten years since I pointed my canoe downstream on the Missouri River and began paddling.  When I arrived at St. Louis, MO, I was already thinking about the "next big trip."  Little did I know that an entire decade would pass before I'd be able to attempt another big float.  In that time there have been a few changes in life (children graduating, losing 35 pounds, knee surgery) and the big upsets caused by the COVID-19 pandemic.  All in all, this year is a really good time to once again point my canoe downstream on the Missouri River...

So, I'm going to finish what I started.  On May 15, 2011 I launched at river mile 563 in Nebraska City, NE, and made the run (in 18 days) to river mile 0 at St. Louis.  My current plan is put in (on May 15, 2021!) at the headwaters of the Missouri River (mile 2,321) at Three Forks, MT, and take out at Nebraska City.  I will thus have traversed the river completely.  Some paddlers accomplish this task in a single outing while others break it up over a few seasons.  My story is that a decade's time counts as complete and I'm not gonna change that thought no matter how much you argue!

Real planning for this began last September and it has been a great replacement for what I'd usually being doing; organizing/completing research projects and/or a study abroad trip for my real life gig as a university professor.  The COVID shutdown has forced us all to scale back or change what we usually do in life, at work, or play.  Getting ready to paddle almost 2,000 miles by canoe has been the perfect diversion during the winter months...

Where am I in the planning process?  The simple answer is lists, lists, and more lists (of things needed to be done)!  My plan for reactivating this blog is to start posting about what I've done and what needs to completed before I head to Montana in May.  I'm pretty confident that I'm on track to be ready to go in eight weeks (eek!).  Until then, thanks for reading my blog and for all the support that I've received thus far.

Enjoy reading and look for me on the water. 🛶

Posted by Jerry Bricker at 12:47 PM No comments: