Give me a (Missouri) Break!

The last two days have been a whirlwind!  At 9:00 a.m. yesterday (Monday, May 24th), Jim and Phyllis Meade met me in the parking lot of the Great Fall Extended Stay Hotel.  A big shout out to the hotel staff, they opened their equipment room to me to store my canoe overnight; it was a relief knowing she was safe and secure while I headed down the street for a several thousand calorie pizza and carrot cake dinner.
Jim and Phyllis are part of Missouri River Paddlers and are godsend on this part of the river. They make it a point to assist as many through paddlers with the portage around Great Falls, MT, as possible.  My trip around the city was #3 for them for this season and I’m told that three more paddlers are departing from the Three Forks river source in the next few days.  They’ll definitely be busy!
After loading my canoe onto their somewhat muddy Ford Ranger (it’s construction season in Montana!), we make a quick stop at the local Walmart where I restocked my food supplies.  I’m now back to carrying five weeks of dehydrated food and I’ve filled my water containers (8 gallons total) full for the next leg of the trip.  The food (ca. 70 pounds) and water (67 pounds) now have the boat loaded to capacity but not much can done, I’m heading into the most remote stretch of the trip where resupply isn’t possible. 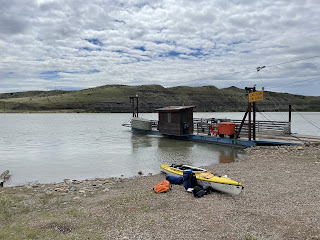 The Meades took me as far as Carters Ferry and dropped me off.  It took some time to reassemble the rudder system on the canoe and to pack the now bulging bags.  It wasn’t until 12:00 p.m. that I shoved off; no worries, though, as I had a very strong tail wind pushing me along.  After last week’s big snowstorm the river has risen and the current picked up significantly.  Things were moving so fast with the wind conditions that paddling wasn’t required.  I sat back, let the rudder guide things, and soaked in the stark scenery of the Montana High Plains.  The trip from Carters Ferry to Fort Benton is 16 river miles.  I pulled into the Fort just after 2:30 p.m., a pretty rapid pace especially when I was trying to stretch the time and enjoy the ride.
Front Street in Ft. Benton was once known as “the bloodiest block in the west” during its time in the 1860s gold rush and the endpoint of navigation for river steamboats heading upstream.  Today it serves as a jumping off point for paddlers heading to the Upper Missouri River Breaks National Monument.  It’s also the commercial hub for this part of Montana and a good place to play tourist.
After setting up my tent and cutting and adding extra guy lines to keep it from blowing away in the wind, I headed into town to do a little sightseeing.  My first stop was at the BLM office to inquire about water availability (limited, carry as much as possible), required permits (none, only a daily user fee of $4), and human waste bags (purchase them down the street at the True Value).  I spent time chatting with the BLM staff member on duty and then I toured the little museum display housed within the building.  The BLM office closed at 4:30 p.m. so I made my way to downtown Ft. Benton hoping to do a little shopping before they rolled up the sidewalks at around 5:30 p.m.
I picked up a few items at the drug store and while the cashier was ringing up my order I made the usual “what do they do for fun around here” small talk.  She replied, “well, we have a movie in town” to which I replied “oh, what film is playing?”  She and the pharmacist then explained that a movie was being shot in town, not playing at the theater.  Evidently, Ed Harris is directing a film starring Robert Duvall using this part of Montana as a backdrop.  It turns out that the gentleman that held open the door for me as I entered the store was Mr. Harris himself.  Of course, I was totally clueless and didn’t recognize him! 😜
The weather this morning continued to be crisp with a light drizzle continuing from overnight.  I was slow to get out of my warm sleeping bag and pack up my gear.  I was on the river around 7:30 a.m. and welcomed the continuing strong current.  The river corridor from Ft. Benton to Ft. Kipp is included in the National Monument.  There are some grandfathered agricultural and motor boating activities and this first stretch of Monument had some pristine scenery but for at least one stretch it felt like paddling an irrigation ditch, a bit of let down from all the descriptions I’d read beforehand.  I resumed my routine of paddling until around noon, stopping for lunch, and then continuing on until about 4:00 p.m.
When I paused for a late afternoon stretch and to strategize where to camp, I realized I was already to the Vergelle Ferry.  At the pace of the river I would be at Coal Banks Landing in another 40 minutes.  My choice was to either stop there or to push on for another camping location.  The temptation of a vault toilet (no having to use a bag!) and the last chance at having WiFi sealed the deal.
The Coal Banks campsite overlooks the river and dinner was spent watching white pelican flying down the channel as deer swam across in the distance.  A pretty good day in almost every way…
It’s Memorial Day weekend and the start of the summer season.  As I was pulling into the Coal Banks boat landing a school group at least 25 strong was noisily departing (very slowly).  Two more groups of paddlers pulled in as I was setting up camp.  The famous white cliffs of the Missouri Breaks are 8 miles down from my current location.  My hope had been to camp there but I suspect it will be too crowded.  We’ll see where tomorrow’s float will take me but I suspect I’ll be pushing on to stay ahead of the holiday crowd.
This is most likely  the last time I’ll have internet or phone access until Ft. Peck a week(-ish) from now.  I’ll “see” you when I reconnect to civilization! 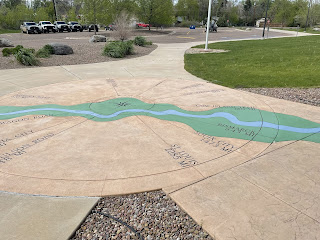 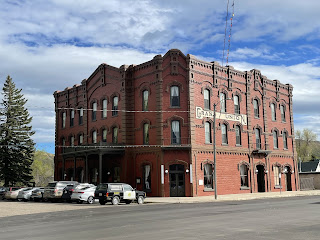 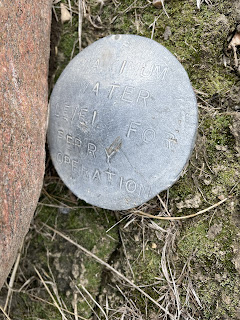 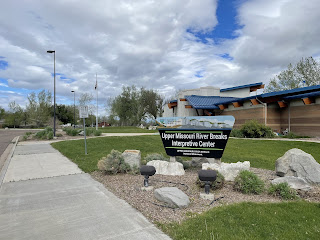