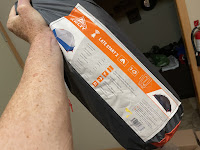 A week has passed since my last post, mainly because I spent a good part of it waiting at Tobacco Gardens for replacement equipment and then for paddling conditions to improve.  Prior to the Williston storm and the shredding of my tent, I had intended to roll into Tobacco Bay, pickup food and supply shipments, recoup for two days, and then get back onto the water.  Of course, plans do change, especially when everything you own is covered in mud and the River is still raging in anger.

I spent Saturday, June 12th going through all my gear and giving everything a good wash.  My dry bags, clothes, and canoe were covered in the goo that is Missouri  River mud.  The stuff is incredible, it sticks to everything and works its way into every opening.  And it doesn’t take much of it to make a mess, one dip in the river and a crust forms that takes an effort to remove.  Oh well, they don’t call it the Big Muddy for nothing!

Most of my clothing was either wet or mud soaked or both and my next task was to sort it all out and bag it up for the Tobacco Gardens (TG) staff to launder.  Once again, I can’t say enough about Peggy’s crew at TG.  I handed them a large trash bag full of soiled gunk and the following day a basket of clean and folded clothing appeared at my doorstep.  Amazing!

By Monday (June 14th) I was pretty much ready to get back on the water.  I dumped all my food onto the bed in my cabin and started sorting.  The three boxes mailed from Lincoln, NE, in April joined the pile and it became clear there was way more than what I could carry.  I counted out 32 days of breakfasts, lunches, and dinners and set the rest aside as a donation to the other through paddlers coming down the river after me.  I also did a shake down of unused equipment and cold weather clothing and boxed it up for shipment home, freeing up precious space in my bags for the added food rations.

That afternoon (Sunday) I made a run to Watford City, ND, the nearest town, with Peggy’s daughter to mail my package home.  Nicky grew up in Watford and graduated from high school in the 1990s prior to the oil boom.  “When I graduated there were less than 1,500 people in town, now we have that many students in the Watford school system.”  The petroleum industry and the jobs created have definitely rewritten the destiny of this region producing a much different set of opportunities for today’s high school graduates.  Nicky left to pursue degrees in psychology and now works to coordinate services for the McKenzie County school system.  Her job definitely gives her insight into the many blessings of jobs created by oil extraction and the negatives that come in the form of changes to decades long social traditions and standards.

Early Monday evening my replacement tent was delivered to my door by the Bob Stieg family (thank you so much!) who happened to be on the road visiting family when Peggy called them asking for assistance.  It’s a basic Kelty model that reminds me of the the first freestanding tents from the early 1990s with flexible poles and a dome shape.  It’s a solid, no frills design that should hold up well to the High Plains winds.  Let’s hope its the last tent I purchase for this trip (Lady River be nice!).

All day Monday I had been watching the weather forecast for my Tuesday departure, especially the wind conditions.  The weekend and Monday had brought in strong winds (20-40 mph) from the ENE, the direction of my paddle.  By Monday evening it was clear that new tent or not, I would be wind bound on Tuesday.  Best to make the best of it and do some much needed napping and binge on Monty Python movies on Netflix.

The winds shifted as predicted overnight on Tuesday and by Wednesday morning were coming from a northwesterly direction.  I rose early on Wednesday, took my last Tobacco Gardens shower and finished packing.  Peggy and Dan, one of the TG crew, took my gear in the service cart to the boat ramp while I wheeled the canoe over.  The wind was coming down Tobacco Bay and thrashing the ramp around pretty good and it was a challenge to get my gear loaded and get onto the water.  After about 30 minutes of effort I was in my boat and, after waving goodbye and shouting many thanks over the roar of the wind, heading out to the lake.

That day’s paddle was like riding a bucking bronco.  I stuck close to the shoreline and used the offshore current to navigate.  The winds sustained at 20 mph through the day gusting to 35-40 mph.  The topography of Lake Sakakawea is such that much of the resulting wave energy is broken as the waves approach the shore.  It’s when crossing an inlet that things become a bit crazy as the waves build to their full size and in many cases they were getting a bit big.  I’ve never been good at judging wave size from a boat (is it height of the wave or the distance between two crests?, I can never remember) but it’s clear that without my sail I would never have been able to ride over these big ones.  By late afternoon the waters were a frothy chocolate mousse and it was time for me to pull out and let the lake rage.

Thursday morning dawned gorgeous and placid and I worked quickly to get on the water early.  I was set back trying to get the pins on my outriggers to seat in place.  I had borrowed a drill at Tobacco Gardens and had altered the design to accept a U-pin.  It all went together easily when I assembling it on the grass but for some reason the hole was no longer large enough.  My handy Leatherman and 20 minutes effort had fixed the situation but I didn’t get on the water until after 8:00 a.m.

That day’s float was perfect.  I had tailwinds the entire day and they were in the sweet 10 mph zone of intensity.  A stop for lunch at noon to stretch and eat lunch was my only stop, I wanted to use the optimum conditions for as long as possible before pulling over to camp at around 6:00 p.m.

Yesterday (June 18th) the high force gale returned with winds gusting up to 30 mph.  I continued to use the shoreline as a buffer but crossing the inlets was still a challenge.  As the wind intensity increased in the early afternoon I pulled over to stretch and rest and consider options.  I decided to call it an early day and set up camp rather than wait until evening to resume if the winds died down (which, of course, they did).  This is a dry year and the reservoirs are down in volume so camping requires hauling gear bags long distances from the water’s edge up to grassy areas to set up camp.  A tiring and sweaty affair but much better than setting up the tent on the sun baked sand and silt “beach.”

When I rose this morning conditions were calm.  A shift in wind direction to the south had been predicted and I was worried that I’d be padding into strong headwinds.  The morning shore breeze gave me some assist and helped me along but I paddled the stretch from Red Butte Bay to Dakota Waters, my destination.  About mid morning Amber K. from Dakota Waters reached out by text message via Garmin inReach asking if I planned to come stay with them.  I’m still wondering how she got my contact information but it’s clear that North Dakota Nice goes above and beyond in helping weary travelers.

I arrived here around 3:00 p.m. and was given the lucky #7 (family) cabin.  A hot shower and nap prior to being stuffed on a bacon cheeseburger and tater tots capped a pretty good day.  The pint of Ben and Jerry’s double chocolate ice cream didn’t hurt things either.  Tomorrow I head for Riverdale and the portage around the dam thus ending my time on Lake Sakakawea.  As I write this rain from a thunderstorm moving through the area has begun to fall and is forecast to clear by morning.  It’s the first storm since the big one hit me near Williston, ND.  I’m kinda glad to be inside a building and safe. 😁😎☁☂☀

Lastly, yesterday I crossed the 50% (879 miles) completed mark.  Each day brings me closer to home but the next lake, Oahe, is said to be the most challenging of all.  Let’s hope the good winds and mild weather hold for my passage into South Dakota! 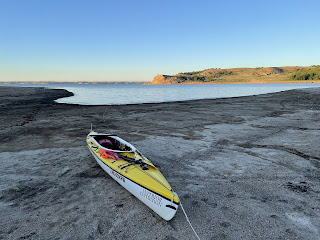 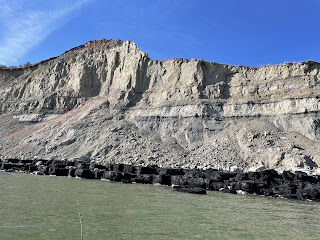 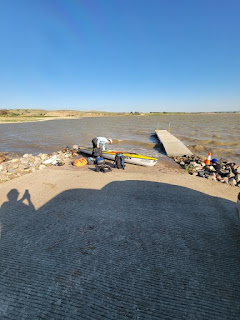 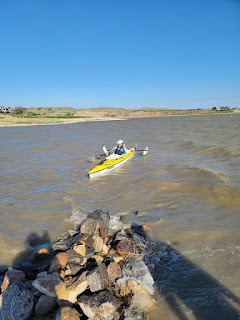 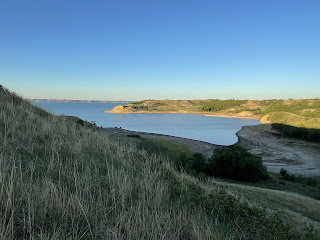 Posted by Jerry Bricker at 9:40 PM