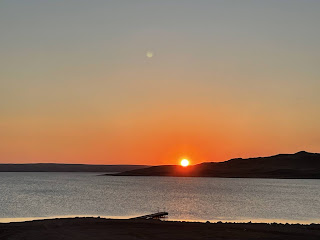 My last two days on Lake Oahe were spent patiently watching the south winds kick up whitecaps and then scrambling to the dam before the weather had a chance to turn sour again.  I spent July 3rd hanging around the campground and thinking I should be doing something useful with my time.  Of course, the preparation for a trip like this was done months ago so there’s really not much of a “to do” list that one carries as they move down the river.

I spent the morning chilling out and at about noon realized that I had taken a long nap after lying down in the tent to escape the wind.  I decided to get out and stretch a bit before inventing another time killing activity.  The Phelps were just coming back from a float on the lake (in the whitecaps!) on their inflatable rafts.  Since SCUBA would have to wait until the winds died, they inflated some pool type rafts, filled a bag with rocks, and tied it to their joined rafts to get out onto the water for a bit.

We struck up a conversation and chatted outside their RV for about an hour before they invited me in for a cold beverage where the conversation continued for at least another hour.  I have passed hundreds, possibly thousands, of RVs on this trip marveling at the striking difference of that form of camping to my own tent approach.  The truth is that I had never actually been inside one of the modern “home on wheels” forms of outdoor travel.  I was quite impressed. Every inch is well used and the expanding bays create a fairly large living space.  The downside, of course, is the need to purchase a truck large enough to pull the rig.  Since I drive a 4-cylinder Nissan Frontier I won’t be making such an investment soon but as I approach the age of 60 it might be time to try a new style of “getting out there.”  OK world, go ahead and be shocked since I was the guy who swore I’d never consider such a thing!

I headed back to my tent mid afternoon with an invite for a hot meal from Mark and Jenna to which I gladly said yes.  Freeze dried food has its merits but anytime I can get a hot cooked option I’ve been taking it, especially to stretch my rations for the last few weeks of the trip.

After dinner the Phelps invited to go up the hill (above Bushes Landing, a site I passed on the lake the day before) to visit their friends Dan and Angie.  A few times on this trip I’ve climbed to the bluff above the river to watch the sun set while trying to get a good cell signal to call home.  The view from Dan’s place was amazing as we watched a series of thunderstorms roll across the lake, once forcing us to scramble indoors to keep dry and continue the conversation.

I can honestly say that this was one of the better evenings I’ve spent on the river.  It was fun to be part of the banter going around the table with no worries about how the next day’s weather would treat me.  It’s one aspect of paddling the Missouri River that I thought I’d encounter more.  This waterway is, however, pretty isolated and I’ve gone 7-10 days at a time not seeing or speaking to other humans so it’s not a surprise that the opportunity hasn’t arisen more.

My go to weather app is DarkSky and it didn’t let me down.  They called for a change in wind direction during the night and it panned out as predicted; conditions were perfectly calm when I awoke.    I ate breakfast quickly and hauled most of my gear down to the shore before Mark exited his RV and helped me with the last few items.  I was finishing loading up the canoe as he was bringing down his SCUBA gear intending on getting in the water to do some spear fishing.  As we said our goodbyes he handed me a small care package that Jenna had prepared which I quickly shoved in my canoe and then I was on my way.

There was no wind most of the morning as I headed south to the Oahe dam.  I still hadn’t worked out the details with my Pierre, SD, contact on shuttling my gear once I got there but I waited until 9:00 a.m. to give him a call since it was the 4th of July.  He didn’t answer but texted back that he was 50 miles south of town and wouldn’t be back that day.  Crud, now what was I going to do?  I kept paddling for a bit as I thought things over then reached for my coffee and remembered Jenna’s care package.  I pulled out the breakfast bar she had included and then turned the bag over and noticed the note she’d written on the outside:

“Trust your journey”…that’s exactly what I needed to do.  It was a great reminder to take things as they come and to stop trying to restrict myself to a daily plan.  OK, if I had to self portage when I got to the dam that’s what I’d do.  Maybe someone would take mercy on me when they saw me struggling but I’d just trust my journey and see how things turned out.  In the meantime, I would post a message on the South Dakota Kayak and Missouri River Facebook group pages and ask for help.

The wind picked up and, as DarkSky had predicted, it was from the north.  I raised my sail and started to make solid progress when my phone rang,  My Facebook post had gotten attention and a member had contacted a friend in Pierre, Paul Lepisto, asking if he could help.  Paul apologized that he had a decrepit trailer to carry my boat but if I was game we could make it work.  A thousand yesses! 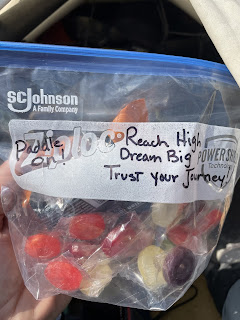 As I hung up the phone I was feeling pretty good and thinking this “trust your journey” stuff was pretty snazzy. It was getting close to noon and I would be soon entering a part of the lake busy with holiday boat traffic.  I decided to pull over and eat lunch as well to stretch.  I spent a short time on shore as the dam was still a solid afternoon’s paddle away and I wanted to make that shuttle pickup.  As I was shoving off a fisherman trolling by started asking me questions about my trip with specific questions about where I camped every night.  I filled him in and threw in a few grumbles about how I couldn’t plan ahead more than a day ahead because of the unknowns of river travel and that had me in a pickle with no place to camp that night.  “You can set up your tent behind my RV if you want” was his reply.  A quick exchange of phone numbers and I was off; within 30 minutes a shuttle and tent-site had fallen into my lap.  Always trust in the wisdom of a Jenna!

The wind died shortly after Ryan made his offer camping offer and I spent the rest of the day paddling in the 90 degree heat and humidity.  As promised, Paul was waiting for me at the Oahe dam and we quickly loaded up my gear and he took me to Campground #3.  The Crego family were either out fishing (Ryan) or running errands so I set up behind campsite #204 before heading off to get a shower.  When I returned Ryan was down by the water securing toys and rafts for the evening.  After quick introductions to the rest of the family Ryan apologized that he had to leave to run to the store to replace a sandal he lost that day on the water.  “Do you mind if I ride along, I need to pick up a few items” was my reply.

On our way to Walmart I got the basic gist of Ryan’s life.  He lives in a small town (population 33) on the Wyoming/South Dakota border and works in the lumber industry.  Ryan grew up on a cattle and sheep ranch, which he loved.  He now works as a lumberjack (the first I’ve ever met!), is married, and has an amazing family.  I found him to be easy going and confident and, like many people that spend long hours thinking while they work, quite insightful.  We chatted a bit about his thoughts on the timber industry, the US Forest Service and their management practices, and the future.  As an old botany and ecology professor that always includes a few lectures on fire ecology in his classes, I was glad to hear how Ryan’s thoughts meshed with my own.  Two ends of the spectrum (one academic and the other extraction industry) that have reached many of the same conclusions.

I wrapped up my stay in Pierre by sleeping in (6:00 a.m.) on July 5th and taking my time to shower and pack for my descent of Lake Sharpe.  The Crego family helped carry my gear down to the river and watched as I managed to get it all inside “that small canoe.”  I shoved off right at the noon hour to begin my next set of adventures that included more thunderstorms, meeting some amazing people, and again being windbound.  Of course, to hear about those events you’ll have to wait for the next update to the solopaddler.com blog! 😆

Posted by Jerry Bricker at 1:49 PM