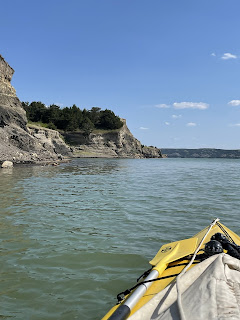 I departed from the campground downstream from the Ft. Thompson dam around 7:00 a.m. on July 10th, a Saturday.  The campground host was kind enough to wheel my gear bags over to the boat launch in his golf cart while I towed my canoe on its cart.  As I crossed the parking lot and approached the boat ramp, I observed a line of about a dozen trucks waiting their turn to back their boats down the ramp and launch for the day.  It was a scene of complete chaos and me right in the middle of it trying to load my canoe without getting run over by an over anxious fisherman!

The weather forecast for that morning called for clear skies and mild NNE winds.  Instead, a thunderstorm started building just as I was about to shove off.  I put on my rain jacket and donned my PFD and hoped for the best as I headed out of the inlet and onto Lake Francis Case.  As I began my crossing to left river bank, the wind began to blow in earnest (9-10 mph) so I raised the sail.  The next several hours were pure canoeing bliss.  I had a strong tailwind that pushed me towards Chamberlain, SD, and I took full advantage of the opportunity to make some quick miles.  The only downside was rain throughout the morning which required me to pull over and pull on my rain pants to go with the jacket.  I also mounted my GoPro on the connection behind my seat and turned it on hoping to get some good footage of me using my sail; we’ll see how much is usable when I get a chance to view it on a computer.

Using the sail and the wind, I completed the 20 mile run to Chamberlain just after lunch.  I pulled over at American Creek Campground and was able to nab a tent site in an otherwise overpacked campground.  I used the rest of the day to visit the laundromat and Dollar Store and to get a hot dinner downtown.  All in all, it was a great first day on the lake.

My game plan for Francis Case was to do at least one high mileage day to get me in position to finish the lake in a timely fashion.  Thus, I was back on the water on June 11th heading to Elm Creek, a paddle of some 32 miles.  That put me in a good position to do shorter miles the next few days as I hopped from Elm Creek to Snake Creek then on to North Wheeler (one of my favorite campsites of this trip) and finally arriving at the Ft. Randall damn.  Thankfully, the weather (wind!) cooperated.  I faced SSE headwinds during my entire crossing down to Ft. Randall but they remained fairly mild each day.  I was nervous the entire time that the wind would kick up and blow with the same intensity as it had on Oahe and Lake Sharpe leaving me windbound on shore.  My luck held and I was able to arrive at the dam on July 14th.

The real story of Lake Francis Case isn’t that I paddled and then paddled some more and then finished paddling, it’s the continuing story of meeting amazing people.  A Facebook Messenger shoutout from a member of the Missouri River Paddlers group, Cheryl Pruett, led to a great dinner and conversation when I arrived at Snake Creek.  That led to the recommendation that I call Bob Foley for help getting around the Ft. Randall dam which led to another great meal and conversation and a real bed to sleep in when I got to Pickstown.  The continuing saga of meeting kind people that pay it forward.

So…one more lake to go and then the run on flowing river to finish my planned trip at Nebraska City.  I won’t say that this trip has been easy and that at times I wasn’t ready to toss in the towel.  I am now starting to savor the description “planned trip” for my summer adventure.  Once I pass the Gavins Point dam I’ll be heading downstream to finish at the spot I always intended.  A small part of me is starting to celebrate but not just yet, I don’t want to jinx things!

Posted by Jerry Bricker at 5:25 PM