The solo paddler isn’t so good at posting blog updates! 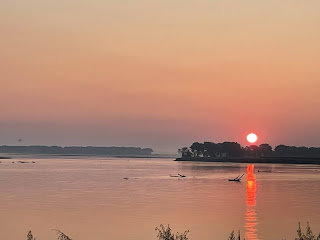 I’ve been busy the last six days paddling, very busy, and haven’t had a chance to post an update about my location or activities…

Lewis and Clark is the shortest reservoir in the 1,100 mile dammed section of the Missouri River.  It’s also one of the trickiest to navigate due to the silted and braided channel leading into the lake.  Leaving the Ft. Randall dam one encounters a 39 mile stretch of river that is part of the Missouri National Recreational River (MNRR) which is overseen by the National Park Service.  It’s a delightful stretch of river that flows fairly quick down past the Verdel Landing and into the braided section of the lake.

Bob Foley dropped me off below Ft. Randall and I shoved off at about 8:30 a.m.  The day was sunny and clear with no rain in the forecast.  My paddle started out with calm conditions then the wind began to pick up, defining the next two days.

Hugging the right shoreline tightly, the bluffs affording me some protection from the wind and I made it to Verdel about 4:00 p.m.  There’s not much in the form of camping opportunities in that area so I pulled out and set up camp at the Verdel Landing boat ramp before heading to the Blue Moon restaurant for a burger. The next morning I entered the braided section and threaded my way through islands of dense invasive plume grass (Phragmites sp.).  The morning light made it hard to read the river and I found myself constantly being “pushed” towards the Niobrara River channel that I knew to be a dead end.  Sure enough, it was and by the time I realized my error it was too late, I had to paddle hard through a tight section of Phragmites as the Niobrara was flowing upstream on the Missouri.  I eventually negotiated the confluence after getting out to pull my boat a few times and then it was a pretty easy paddle to Springfield, SD. 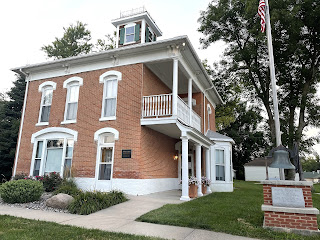 I camped in Springfield and hitched a ride into town for a burger with the local conservation officer (after I informed him that he would love to give me a ride) at Norm’s cafe.  That was followed by turning in early to get some rest before my next day’s traverse of the lake.  It’s a good thing I did, I fought a strong SSE for the entire day and reached the Gavin’s Point dam after a 12 hour battle with whitecaps and wakes of Saturday afternoon boaters.  The key was that I was done with those damned dams!   Even when it looked like I would get windbound for at least a night I pushed on, I wanted off that water badly.

The next day, after help shuttling around the dam, I entered the 59 mile stretch of the MNRR.  This was actually one of the most scenic parts of my trip and one I greatly enjoyed.  The river flows free and the scenery is stunning in that part of the river, a great way of welcoming back to true river travel after the windy lake section.

For the next five days I’ve paddled hard putting in 40+ mile days to get south of Omaha and wrap up this trip.  The current has been of great assistance allowing me to finish most days by 5:00 p.m.  I’ve seen some great scenery and have enjoyed a few of the towns, especially Decatur, Nebraska.  At river mile 750 the Channelized section of the river begins and is defined by wing dams that direct the river’s flow into a 300 foot wide and 6 feet deep channel from Sioux City southwards.

I’m now in Bellevue, NE, after putting in 48 miles of paddling; my longest day of the trip.  I’ll be at Nebraska City tomorrow and then I’m done.  This is day #68 and the beginning of my adventure feels like it was years ago, I barely remember the Montana portion of the trip.  I’ve had a lot of great encounters with folks along the way and way too much alone time to think and ponder life and the status of affairs, both my own and the world’s at large.  It will take a few days to decompress from my journey then I’ll post a final update with my thoughts and reflections. 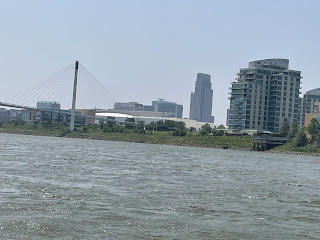 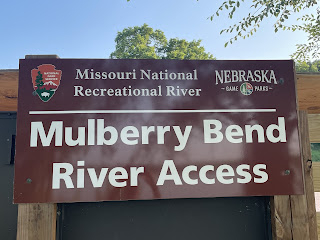 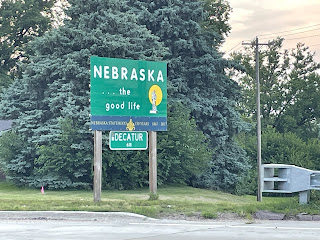 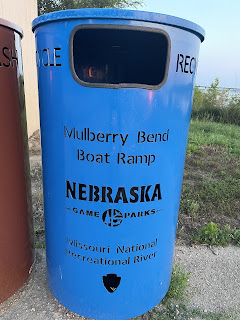 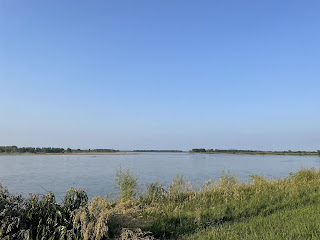